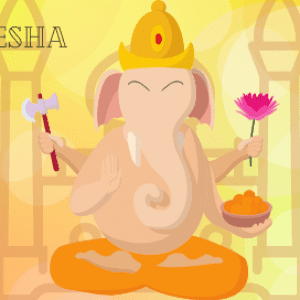 One of the greatest festivities on earth takes place in India annually for 11 days. It’s not exactly known the exact origin of the festival, which aims to celebrate the birthday of god Ganesh Chaturthi, but it’s known that it has been celebrated throughout India for several centuries.

The belief is that the rituals are to attract good luck by praising the “good fortune provider, lord of beginnings and great obstacle remover” and Ganesha is revered during this period in temples and domestic altars with diverse offerings such as sweets, flowers, rice, coconut, brown sugar, coins and prayers.

The last day of the festival is celebrated in grand way: thousands of followers make colorful parades through the streets to sing, dance and end with the immersion of the images in the nearest sea or river. This immersion is seen as a farewell ritual for his journey back home on the sacred mountain of Kailash.

As the story goes, Ganesha’s favorite food is a sweet called MODAK, delicacy made from rice flour, brown sugar and grated coconut, which eventually became one of the most produced and consumed foods during this period.

The grandeur of the festival and the high consumption of MODAK made its commercialization an interesting business not only in India, but in many other countries where the presence of Indian culture and community is massive, like France and England.

Being among the countries with the largest population in the world, where the majority is extremely connected with their culture and religion, it is not surprising that scale production of MODAK has become a promising business.

In this sense, relying on equipment that can speed up and enhance production, also bringing quality and standardization, can be a solution. Among the equipment that can help in this process is DROP TOP from BRALYX. A multifunctional machine developed with dosing, depositor and wire cutting systems that can make MODAK in the ideal format. Thus, it’s possible to manufacture many sweets of the same size in a short period of time, resulting also in labor and ingredients savings.

FIND OUT MORE ABOUT INDIAN CUISINE

Indian culture is very rich and surprising and so is its cuisine, which is full of very characteristic herbs, spices and seasonings. Among the most popular spices, the highlight is curry, which is part of the preparation of many of the Indian dishes.

Going a little further, like any culture values gastronomy, the Indian menu has several appetizers, savory and sweet, with or without filling, that are already part of the day-to-day of their community and most of the typical restaurants spread around the world, such as: samosa, Kaju Roll, Seedai, Masala Kachori, Gulab Jamun.

And what do they have in common? They can easily have their production mechanized through Bralyx FORMING AND ENCRUSTING machines!

These equipment have been specially developed to help a business (home or not) to grow and prosper. With them it’s possible to manufacture a much larger number of products in the most varied sizes and formats.

In the market for over 25 years, despite being a genuinely Brazilian company, Bralyx is present today in more than 70 countries. One of its great differentials is that its line of machines can be easily adapted to diverse ethnicities and its cuisines. Among Bralyx customers there are several establishments, producers and suppliers of items from the Arabic, Indian, Latin, Asian cuisines, among many others. Large, medium or small, all these companies can count on the innovative Bralyx equipment, ideal for any and all types of business anywhere in the world!